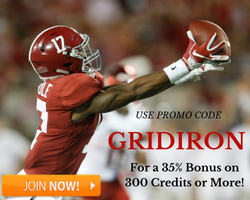 Use promo code GRIDIRON to redeem a 35% credit bonus on your credit deposit. Minimum purchase of 300 credits required.